Ultimum5 in action and what the experts say

What the Car Dealership and Servicing Mechanic say

The following provides information regarding the composition of Ultimum5, how Ultimum5 works, what effect it may have relating to tolerance levels of metals in fuel, and what it can do relative to other common fuel additive types.

Once Ultimum5 is blended into liquid fuels at the manufacturer specified rate, the total amount of elemental Fe, V, Sb, and P comprising the catalysts blended into finished fuel is less than 0.560 mg/L (parts-per-million, or ppm) when fuel is dosed according to manufacturer specifications.  In no case do any of the metals or P added by treating fuel with Ultimum5 exceed known specific tolerance limits for individual metallic elements.  Currently, there are no known US, EU, or other specific tolerance limits for V, P, Fe, or Sb in on-road type fuels – diesel or petrol, with the exception of P for biodiesel (see below), where biodiesel would be part of a biodiesel/petrodiesel blend.  Biodiesel has total aggregate limits for Group I1 and Group II2 metals, but no GroupI or GroupII metals are contained in Ultimum5.

Biodiesel created according to EN14214 and ASTM D6751 standards has phosphorus tolerance limits of 4 mg/Kg and 10 mg/Kg respectively.  The bulk density of biodiesel conforming to the EN14214 standard is 0.86-0.90 Kg/L.  Total P content added by treatment with Ultimum5 is 0.023 mg/L.  Total levels of P added by treatment with Ultimum5 are orders of magnitude lower than either specified tolerance limit for biodiesel.

With respect to ash content in MFO (residual or distillate), diesel conforming to EN590, SANS 342, ASTM D975, and IS 1460 standards, the tolerance level is 0.010%, which equates to 100 mg/Kg.  In the case of biodiesel conforming to the EN 14214 or ASTM D6751 standards, the sulfated ash tolerance limit is 200 mg/Kg.   In terms of total added ash content, the amount of non-combustible solids added by Ultimum5 to a liter of any of these fuels is a maximum of 0.658 mg when dosed at manufacturer-specified rates.

No ash or metals tolerance limits were noted for gasoline standards in the EU or US.

The following provides information on how the suite of catalysts in Ultimum5 works in relation to combustion and emissions reduction.

Fe2O3 is known as an oxidation catalyst, and has been commonly used as such in the production of sulfuric acid (H2SO4) from SO2 4.

Fe2O3 facilitates the combustion reaction once combustion is initiated in the engine cylinder in two related ways.  The first action of hematite is dissociating O2 into Oxygen free radicals 5.  The second is reducing Activation Energy 6 with regard to oxidation reactions.

Activation energy is the amount of energy required to initiate a chemical reaction, which, in the case of petroleum fuels, is the reaction between oxygen free radicals and hydrocarbons. 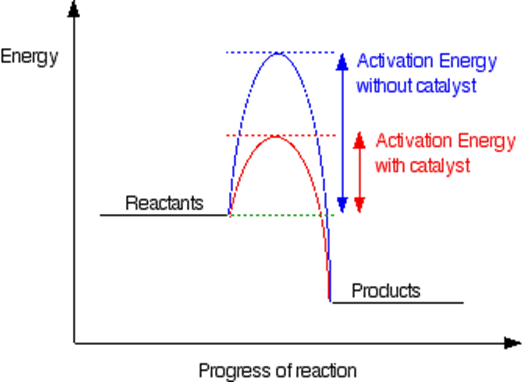 In a closed system such as an engine's cylinder, these paired effects during fuel combustion translate to more system energy available to do work per unit of fuel consumed.  This is commonly seen as an improvement in engine torque, as shown below in a comparative engine output trial between untreated and treated diesel.

The red line is with Ultimum5 and the grey line is normal untreated fuel. 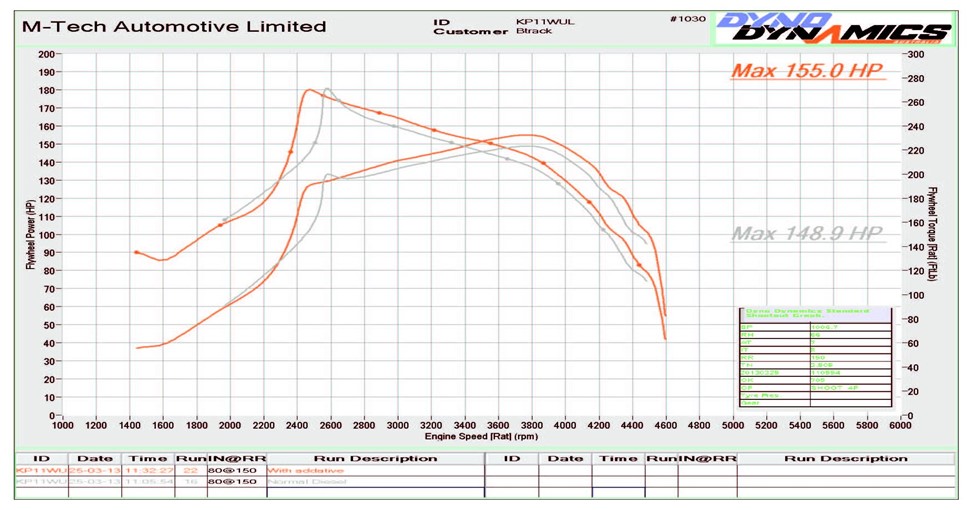 Even with the catalytic effect of Ultimum5 on combustion efficiency and engine output, fuel does not burn completely.  Nitrogen is present in the atmosphere entering the engine, and diesel typically includes very low levels of Sulphur.  The resulting emissions typically comprise various atmospheric gases, plus the results of oxidation reactions between oxygen and C, H, N, and S, those being CO/CO2 NOX, and SOX, as well as residual short chain hydrocarbons and particulates (soot).

Ultimum5 also contains catalysts that work post-combustion to reduce emissions.  The catalytic process by which Ultimum5 reduces NOX and SOX is similar to Selective Catalytic Reduction (SCR) units, but there are significant differences with the Ultimum5 emission reduction process.

By way of illustrating the difference between the SCR process and how Ultimum5 acts, consider the SCR process.  A solution containing ammonia (NH3) or urea (NH2CONH2) is injected via an add-on mechanical unit into the exhaust stream post-combustion.  Where urea is injected, thermal breakdown of urea in the exhaust gas stream forms two compounds isocyanic acid (HNCO) and ammonia.  Ammonia works as a free radical in concert with the redox properties of the SCR catalytic converter unit to reduce NOX (a combination of NO and NO2) to N2 and H2O.  The simple form of the reaction is as follows:

The SCR chemical reaction set depends on NO/NO2 in the presence of reactive sites on the catalyst and NH3 acting as a free radical first causing NO2 to further oxidize and react with NH3, forming NH4NO3, which is then reduced by NO to NH4NO2, which then decomposes to N2 and H2O 8. The catalysts in Ultimum5 are different than those typically used in SCR.

The Ultimum5 catalysts that affect emissions are used commercially in redox reactions and are not specific only to Ultimum5.

Ultimum5 catalysts do not rely on ammonia or urea injected into the exhaust stream post-combustion to act as a free radical to reduce NOx to N2 and H2O.  Instead, there is a two-step process, making use of a highly selective partial oxidation catalyst and an ammoxidation catalyst.   The reaction mechanism for V/P oxide catalysts in terms of selective partial oxidation (as opposed to more complete oxidation with other catalysts such as platinum-based ones) is not well documented. However, it is known to exist, and for that reason, V/P oxide catalysts are used extensively in the production of maleic anhydride from n-butane and 1-butene9.  In terms of its utility in Ultimum5, the partial oxidation catalyst selected for use (VOPO4·nH2O) could create hydrocarbon free radicals (CH, CH2) from unburned short-chain hydrocarbons that are in the exhaust stream, making use of its partial oxidation properties by the following proposed reaction pathways:

That said, Ultimum5 does not have the same shortcomings that SCR does, where SCR only becomes effective once the system reaches a sufficient temperature for catalysis to occur, which is typically between about 250°C and 430°C.

Ultimum5 also is not subject to catalyst “poisoning” (a reduction in catalytic effectiveness due to reaction with emitted exhaust gases that, over time, act to impede the catalytic effect).  This is because active catalysts are being continually supplied in the fuel.  This also obviates concern about thermal cycling breaking down the physical structure of their catalytic converter over time.

The reason VOPO4·nH2O was selected for use in Ultimum5 was due to its effectiveness for the purpose.  The purpose was not to completely oxidize unburned hydrocarbons, as might happen with platinum-based or cerium-based catalysts. It was only to partially oxidize them, leaving hydrocarbon free radicals to act in concert with the Ammoxidation catalyst to reduce unwanted emissions in the exhaust stream.

The reason V4Sb6O8 was selected for use in Ultimum5 was that its effectiveness as an ammoxidation catalyst, and therefore, its ability to reduce NOx, SOx, CO, and CO2 in the presence of hydrocarbon free radicals was sufficient for the purpose, but the catalyst was not so effective as to impede the effectiveness of the hematite catalyst generated during combustion of Ferrocene with regard to oxidation reactions.

As regards the exhaust, it’s widely known that various metals are emitted in the exhaust during diesel engine use, as part of particulate emissions 10, 11, 12, 13.  Metallic emissions in diesel exhaust comes from two sources: the fuel itself, or from metallic additives in engine oil and wear metals deposited in engine oil 14.
With regard to the total amount of metals plus P emitted as a result of Ultimum5 usage, consider the following; a vehicle with a fuel use rate of 30 miles per gallon (3.785 liters/gallon) traveling at 60 miles per hour using fuel dosed with Ultimum5 will emit less than 0.0706 mg/minute of combined V, Sb, Fe, and P.  The total amount of Fe, V, and Sb alone emitted from a typical 6-cylinder diesel engine in exhaust is approximately 4.481 mg/minute14.   Comparing the two values, the total amount of metals and P emitted as a result of Ultimum5 usage under those circumstances increases the total metal concentration of diesel exhaust by less than 1.5%.

Typical additives used for detergent purposes, sequestering water, improving cetane/octane levels, etc., can only return engine efficiency and emissions to levels approaching that of a clean, new engine.  Because of the unique catalytic formulation of Ultimum5 and how it affects both the combustion process and exhaust gas makeup, fuel economy and emissions can be improved over and above levels observed in clean, new engines.  No other fuel additive can successfully make that claim.